Jesus in a Box? – A Samantha Landmark 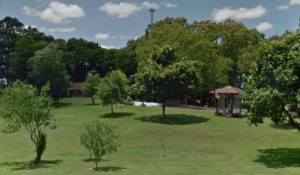 Standing in line at the Dollar General in Samantha can be entertaining at times, and this particular day was no exception. I overheard a couple of fellas who had not seen each other since high school catching up. “Hey man, where are you living now?”  “Oh, I live about one mile down that road in front of the Jesus statue.” I thought about that conversation on my way home and as I turned into my drive I stopped at the statue in my yard and thought about the story behind this local landmark. After the death of my grandmother, Pealie Mae Williamson, in February 1998, my daddy, Johnny Williamson, was inspired to create a representation of the 23rd Psalm. It was her favorite scripture. A Cypress log was chosen for The Good Shepherd Statue because of the longstanding belief that the Cypress is the “gopher wood” (or kopher, which is the Hebrew word for waterproof) that Noah used to build the ark. Daddy worked alongside his longtime friend and local artist/sculptor, Willie Logan, to carve the 6-1/2 foot statue of The Good Shepherd.

It’s sort of amusing how you can become so accustomed to something that you no longer see it, or think about it. This statue has just been part of the normal landscape in my daddy’s yard for years. But, a few years ago I started noticing it when I would visit him. I developed a desire to know and understand what he saw, what his intentions were, and how he viewed The Good Shepherd Statue. I began to ask questions, and we spent hours sitting in the rockers on daddy’s front porch, shelling peas or peeling apples, as he tried to teach me. 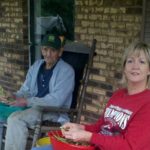 Shelling peas with daddy on his porch

Finally, after a ton of my questions, he said, just read, Joshua 4. You see, my father was a great teacher, but he didn’t just simply give you all the answers. He was a deep thinker and that is what he wanted me to do: think about it, ponder on it, dig for it, and come to know it on my own. Local newspapers had done some articles in the past on the statue, and I dug them up. He had told those reporters, “The Statue is a testimony of my faith. It isn’t meant to be an idol. You don’t worship it, but it gets people to think and do good deeds.” Hmm, Good deeds. Well, I had certainly seen him do many good deeds over the course of my life. Time and time again, I saw my daddy give to others. He was selfless. I don’t recall ever hearing him say he wanted anything for himself. Giving to others was always on his mind. And somehow, he managed to know what their needs were.  A friend told me once, “your daddy was like a magnet, you just wanted to be around him.

Daddy had a heart attack in March (2013) and died four months later. I had the privilege of living in his house with him during those four months. During many long nights, when he couldn’t sleep, he talked intently about life, pouring story after story into my heart and life that I will never forget. A few weeks after his death, I was looking through his books and found A Shepherd Looks at Psalm 23 by Phillip Keller. I could feel my daddy’s big hands on the book as I opened it. Reading this book helped me connect the dots of what daddy had tried to tell me and it gave me a new understanding of The Good Shepherd. I went back and read Joshua 4. This time I really read it with my heart’s ears. Joshua 4 teaches us to set up memorials as a testimony of what God has done and so that our children and others will ask us “what does this mean”? If provides an opportunity to tell others about Jesus – to tell our story. Since 1999 when it was erected, The Good Shepherd Statue has caused much conversation. Some understand it, some don’t. It has certainly fulfilled it’s purpose of setting down stones as memorials according to Joshua 4. Folks from all over the United States stop by to see it and take pictures. The sheep was stolen once, but thanks to some good Samaritans it was returned to it’s place next to The Good Shepherd Statue.  Some call it Jesus in a Box. Daddy never really liked that term. He would say, “everyone knows it’s not Jesus, and you cannot put Jesus in a box”. If you are ever traveling along Highway 43 in Samantha, you are welcome to stop and pay a visit. Check in on Facebook. Take pictures and ponder the meaning of The Good Shepherd.

His sheep know His voice. 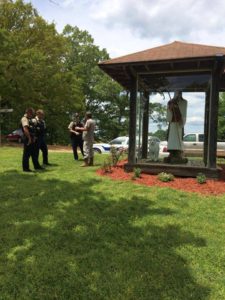 A Note of Thanks

I generally don’t like “blanket” thank yous but I’m breaking my own rule. Thanks to everyone for all the phone calls, visits, gifts, songs, texts, cards, food and well wishes for my birthday. It was truly a great day of celebration. I am truly blessed with amazing friends and family. I feel so loved. I used to fib about my age and unlike most women who say they are younger than they are, I would tell folks I was 10 years older so they would think “dang she looks good for that age” LOL. (Yep vanity). But as the years have mounted up it’s hard for me to say I’m 66 so the time has come for me to be honest and honestly I have trouble remembering my real age now. Isn’t that ironic? Fortunately, vanity has faded AND I appreciate more of the real things of life now. SO, as I start day 2 of year 56 I vow to stay in the moment more and capture more of these days that are zooming away at such a fast speed.

I saw a sign in a gas station recently that said “free gas tomorrow”. It might take you a minute to let that sink in. There will never be any free gas at that station because tomorrow will always be today. So the moral of the story – BUY YOUR GAS TODAY!!! The future is simply history of all the todays. Whatever each day brings, whether circumstances are good or not so good, I will give that to My Savior, Jesus Christ – who holds it all in His Hands. All my gifts come from Him – even you, my friend. Happy 4th of July.

Always keep “The Son” in your eyes.  Becky Williamson-Martin 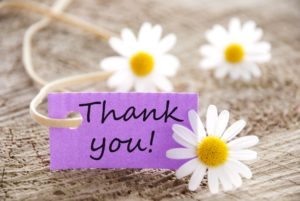 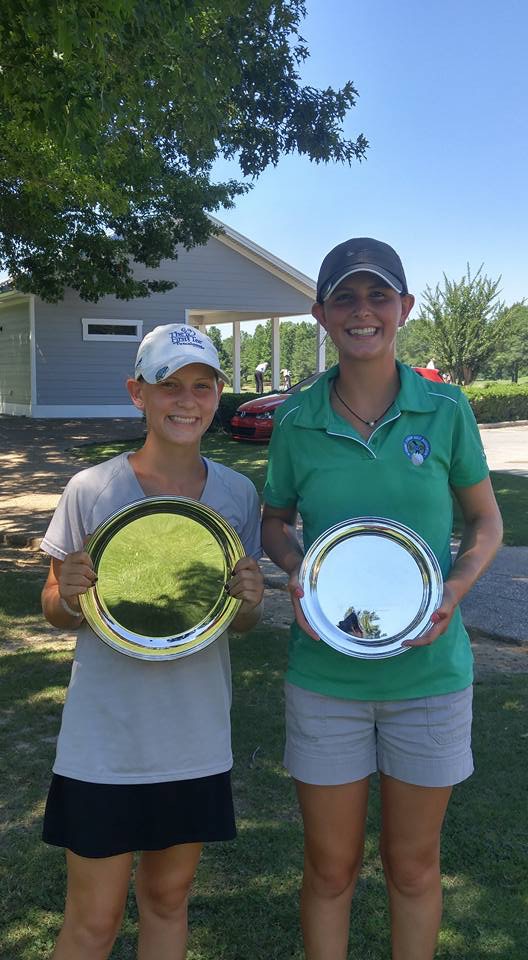 Karlee attends Northside High School and Erika attends Northside Middle School. The two sisters plus their younger sister Ashlee (who will also attend NMS this upcoming year) are members of the First Tee Program at Ol Colony in Tuscaloosa.

You Can Thank a Farmer

Farming is a huge industry in our community and if you live here or have traveled through, you have found yourself behind a tractor.  And, admittedly, some times it can be frustrating.  This writer confesses.  I mean we usually wait until the very last minute to leave and have no time to spare to get to our destination or frankly we all think our schedules are the most important.  Tractors and trucks – such nuisances, right?

But I always recall what my brother Ricky said one time a long time ago about a driver complaining about slow log trucks, “if it wasn’t for log trucks you wouldn’t have any toilet paper to wipe your butt”.  Haha.  Please excuse the curtness of that.  🙂  Soooo, I always try to remember the same holds true for trucks and tractors.  If it were not for them, we would not have the luxury of walking into the Dollar General and conveniently picking up those items that we can’t live with out.  “From the fuel that fills your truck, To the coffee in your cup, Don’t thank the corner store, For that early morning rush, Thank a farmer”.  Well, I don’t know about you but I couldn’t live without my coffee every morning.

Here’s a great song and video to help us (me included) keep the right prospective about those who devote their lives to making sure ours is more “comfortable.”

And for this shirt on my back
And these boots on my feet
And them tank top wearin’ country girls
And them old skin-tight bluejeans
I thank a farmer
Yeah, thank a farmer

A lot of folks like me still care about the FFA and county fairs
And the folks who really make this world go round
I’d like to thank a farmer.

The story behind the song:  http://roughstock.com/news/2013/04/15526-story-behind-the-song-james-wesleys-thank-a-farmer/

Why is it Important to Remember and Preserve Our History?

Preserving history is commitment to remembering the past and a stepping stone for our future generations.  How can we know where we are going if we don’t know where we came from?

One important piece of history is it’s old homes and buildings.  By preserving historic structures, we are able to share the very spaces and environments in which the generations before us lived or conducted business.  A snapshot of their daily lives.

These buildings change with us, thus recording a piece of each generation’s story. We have an obligation to respect this community resource and preserve it for future generations.

The more the community is involved, the more attractive and effective an area will become for locals and visitors. 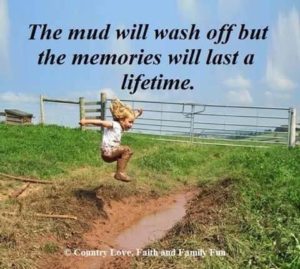 If you don’t recount your family history, it will be lost. Honor your own stories and tell them too. The tales may not seem very important, but they are what binds families and makes each of us who we are.

Always keep “The Son” in your eyes

Welcome to Samantha Living.  We hope you enjoy our adventures in this wonderful community we share.  We will post stories about neighbors, family and friends.  Some things that are going on now and some things that are from the past.  History teaches us – about life – about our heritage.  An old proverb says, Until lions have their historians, tales of the hunt shall always glorify the hunters.   Let’s be historians for the lions. We invite you to join in the conversation.  Give us ideas of subject topics to discuss or stories to pursue.  We also invite guest contributors.  We would love to have you write your own memories or share what you are doing in our wonderful little community in Samantha, Alabama.  None of us are getting any younger, you know.  And we all have those special community leaders who have impacted our life or we know have contributed to the betterment of our community.  We want to hear about them too.  Let’s highlight them while they are still with us – while they can enlighten us on life.  Email your story to editor@samanthaliving.com Let’s provide something good.  With so much negative stuff in our world, a little uplifting story can go a long way.  Even stories of struggle that brought healing or goodness to your life can be encouraging to others. Let’s be encouragers!  Let’s start now.  Check back with us often.  We hope to spotlight a family soon and learn about their piece of history in Samantha, Alabama.